If you were on the internet last Wednesday night during Game 1 of the first-round matchup between the New York Liberty and the Chicago Sky, chances are you’ve already seen this filthy no-look, behind-the-head laser beam that Marine Johannes fired at her teammate, Natasha Howard.

It’s the kind of pass a person might try with friends while warming up to play some relaxed 3-on-3 at the park, not something most people would be brave enough to bust out in front of a stadium full of fans. And when you consider that her team was playing on the road and trailing by six with only three minutes left IN HER FIRST-EVER WNBA PLAYOFF GAME, that Johannes had the nerve to channel Bob Cousy in this particular in-game moment is frankly a bit mind-boggling. The minds of the Sky players definitely looked boggled, anyways. They didn’t score again for the rest of the game, as Johannes and the Liberty closed with a 13-0 run to seal a 98-91 victory.

I was curious how many other absurd assists Johannes has made this season, so I watched them all and found out. 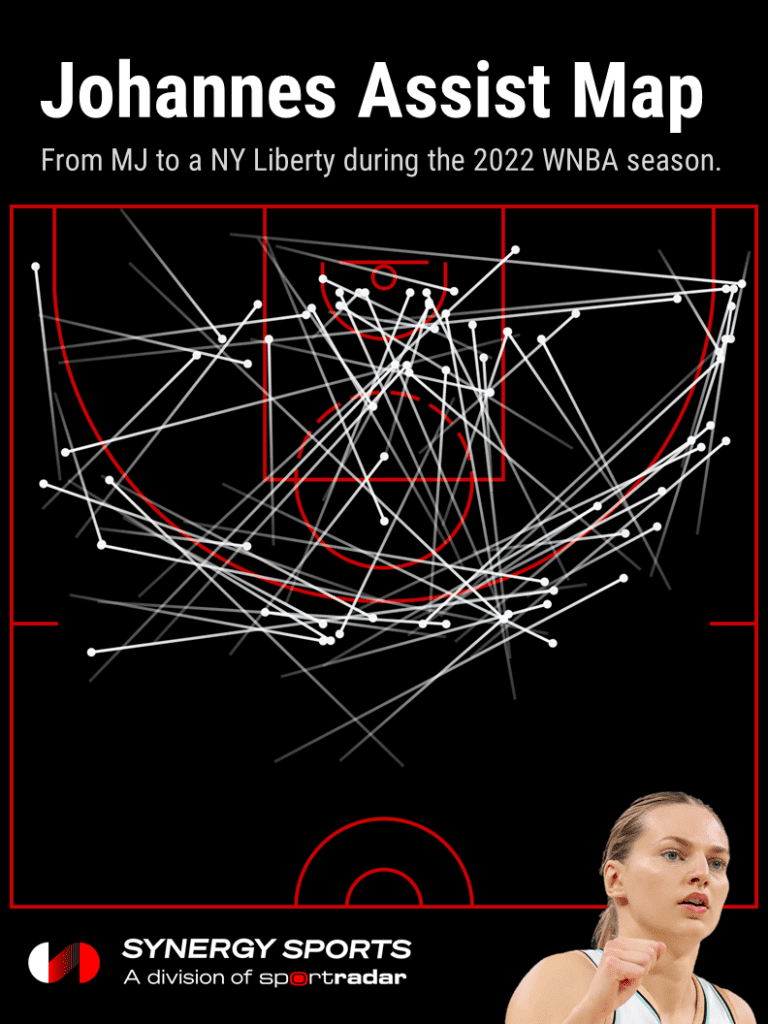 I catalogued all of Johannes’ assists and sorted them into different buckets: by which Liberty teammate she assisted, by the type of pass she made, by the value of the shot that was created, by the type of play that led to the assist, and by the number of hands, feet, and eyes she used to make the pass. The inescapable conclusion is that Johannes is just a fantastically fun passer. Last Wednesday’s pass was exceptional, but it was hardly an isolated incident. The big theme of Johannes’ assist breakdown is the sheer diversity of her passing. She spreads the ball around to all her teammates, whether they’re standing on the perimeter or in the paint using a mix of different actions. And she has every type of pass in her bag. Obviously, she’s mastered all the familiar stand-bys you remember from gym class: crisply snapped chest passes, perfectly weighted bounce passes dropped into the post, overhead passes sailed just beyond the defense’s reach. In fact, her most common method of assistance was that two-handed overhead pass (32% of her assists). But she has all the fancier varieties, too: behind-the-back, underhand, push, hook, and sling! Look how she casually flings the ball 42 feet cross-court to set up a teammate for an open shot, here.

A cross-court, one-handed sling pass to Lorela Cubaj for the jumper. pic.twitter.com/mCtfng695l

Sling passes like this one made up 14% of Johannes’ assists during the regular season. She has a knack for passing on the move without needing to gather the ball in both hands first. This off-the-bounce improvisation allows her to use unexpected release points and to sneak passes around defenders before they are expecting it. In all, nearly half (45%) of Johannes’ assists were one-handed this season, including this breathtakingly smooth behind-the-back number.

Behind-the-back to set up a Stefanie Dolson 3-pointer. pic.twitter.com/clEZ5q6E4f

Johannes is a very dynamic playmaker. Three-quarters of her assists this season have come from plays where she was on the run (52%) or jumping up in the air (23%) before passing the ball. Like the rest of her game, Johannes’ jump passes have an effortless cool. She looks so comfortable twisting and floating in the air until a teammate comes open. Of course, the jump passes have a purpose, too. She jumps to create better angles for entry passes and to draw defenders out of position. Here, her leap forces two defenders to commit to her drive and she’s able to lay the ball off to a teammate cutting down the lane.

Driving, jumping, and dropping it off for a Stefanie Dolson layup. pic.twitter.com/BC7EP8JkYU

But more than anything else in Johannes’ passer profile, the thing that stands out to me is the volume of no-look assists she’s racked up this summer. More than a third (36%) of her assists have been of the “look one way and then pass the other” kind. In the charts below, the direction of the pass is shown in white (from the diminishing tail where Johannes was standing to the bright dot where her teammate caught the pass) and the direction of her gaze is approximated by the yellow “flashlight” cone. Now, depending on the camera angle, it can be a little tricky to confirm a passer’s eye direction with 100% accuracy, so I took some poetic license where necessary, using the trail of wrong-footed defenders and flinching teammates as my guide posts. Take a look at all those no-look dimes (or, I guess if you want to be like MJ, don’t look). It might be tempting to write Johannes off as a hot dog. A showboat. But the truth is she’s using her fancy passing arsenal to devasting effect. She creates a lot of her assists (40%) in pick-and-roll actions and she has been a great decision maker in these situations this season. Among 46 WNBA players who have created 100+ scoring chances for their team as the PNR ball handler this year, Johannes has been THE most efficient playmaker – with the Liberty scoring 1.10 points per possession in those situations. Nobody else in the league has done a better job finding teammates in the pick-and-roll and her no-look passing has been a big part of her success.

Natasha Howard, Stefanie Dolson, and Han Xu have all been regular PNR partners for Johannes this season. Here’s a clip of Johannes sliding a no-look bounce pass to Howard on the roll.

Hitting Natasha Howard rolling to the basket with a no-look bounce pass. pic.twitter.com/3r6Ni0mcTE

We can use a moving-dot animation to slow things down a bit and remove the players who weren’t directly involved in the action.

Watch as the ball screen develops on the left wing between Johannes (#23) and Howard (#6). Washington Mystics forward Myisha Hines-Allen (#2) steps up to meet the screen and slides her feet trying to keep Johannes from turning the corner, but Natasha Cloud (#9) doesn’t immediately switch assignments leaving Howard open to slip towards the basket uncovered. This forces Shakira Austin (#0) into the unenviable position of deciding whether she should follow her assignment Dolson (#31) to the top of the key or slouch off her to protect the hoop.

Of course, Johannes is anticipating each of these movements and she knows that Austin is caught between a rock and a hard place. So, as she comes off the screen, she points her eyes straight ahead as if preparing to kick the ball to Dolson at the top of the key before covertly sliding the bounce pass down to Howard for the easy lay in.

Johannes keeps defenders guessing in these situations by mixing up passes to rollers and cutters (30% of her assists) with passes to spot-up shooters on the wing (47%). Here’s a play that starts off a lot like the previous one but ends with Johannes choosing a different option. In this case, Johannes makes the defense think she will pass to roller before tossing the ball to the wing with another no-look pass.

Scooping it no-look to Natasha Howard who's spotting up for a three-pointer. pic.twitter.com/6IuNc7pmx4

Once again, Johannes (#23) starts as the ball handler on the left wing. This time, Dolson (#31) is the screener and Howard (#6) is waiting on the opposite elbow. Like the last clip, two defenders (#42 Brionna Jones and #10 Courtney Williams of the Connecticut Sun) follow Johannes through the pick leaving the roller (Dolson this time) to dive towards the hoop as an open layup threat. On this play, the third defender (#35 Jonquel Jones) tries to split the difference between the roller and the wing giving up an open three for Howard (#6).

What’s neat about comparing the two sequences is that – up until the moment the ball is released – it’s not clear whether Johannes will sling a bounce pass down the lane or flip a pass to the wing. She’s like a major league middle reliever keeping the pitching motion 100% consistent to avoid tipping which pitch is coming next, a curve ball or the heater. And the misdirected eye movement just adds another layer to the deception, allowing Johannes to manipulate defenders into taking a step in the wrong direction and opening up more space for her teammates.

The Liberty will need every bit of Johannes’ cunning tonight against the Sky, as they attempt to bounce back from their Game 2 shellacking and reach the second round.