Conference Balance in the NBA, Past and Present 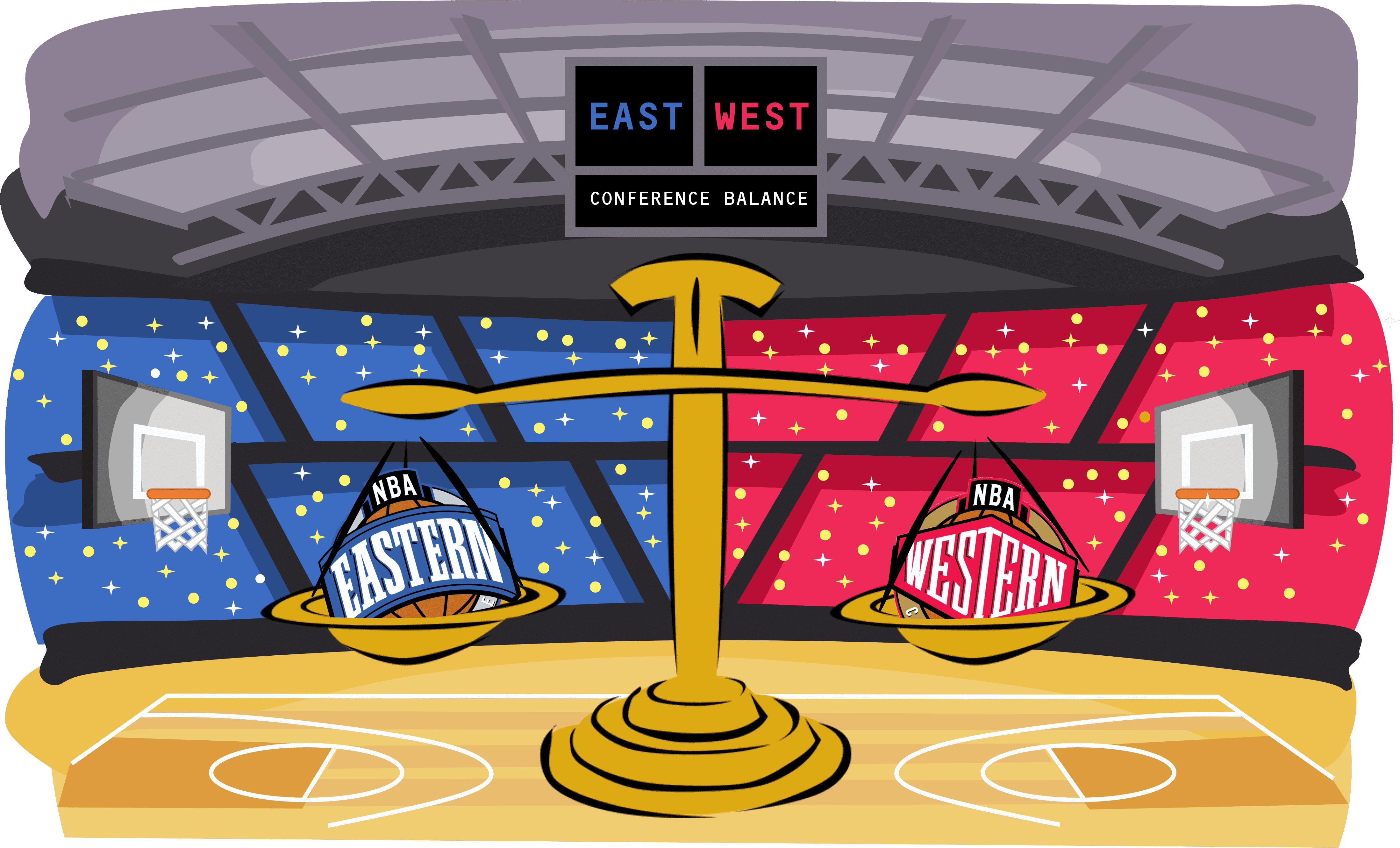 The fourth quarter of the 2021-22 NBA regular season has begun. The All-Star break is behind us, rosters are taking their full form and the playoff (and play-in) teams are gearing up for the thrills of the stretch run. Coming out of a busy trade deadline that featured a blockbuster swap between the 76ers and Nets and valuable pieces added to the Bucks, Cavaliers, and Celtics, one defining storyline has become the strength and depth of a newly loaded Eastern Conference.

The Nets, who were the preseason favorites to win the championship, currently sit at 8th in the East standings behind the Heat, Bulls, 76ers, Bucks, Cavaliers, Celtics and Raptors. That long list of talented teams does not even include the 9th-place Hornets, who score the most points per game in the league at 114.1, and the 10th-place Hawks, who finished just two wins away from the NBA Finals a season ago. In total, 10 of the top 15 most efficient offensive teams in the league are in the East. There is an excess of exceptional teams in the East, and the race to the playoffs and beyond should be quite fun.

The balance of power favoring the East represents, at least narratively, a shift from the norm that’s been established throughout recent memory. For years, it’s been a common belief that the West is king and the East plays second fiddle. That sentiment has not been without merit, as I’ll highlight below, but it’d be wrong to not acknowledge this year’s East as a considerable deviation from the historical trend. A lot of that is thanks to the emergence of the Cavaliers and Bulls, perhaps the two most positively surprising teams in the league this season, as well as recent surges from the Celtics and Raptors, who have been two of the NBA’s best teams in 2022. Familiar faces like the Heat, 76ers and Bucks have matched expectations as serious championship contenders, and a fully healthy Brooklyn team is still a force to be reckoned with.

It’s an exciting narrative for the league that the East is “back.” But back from what? How can conference strength be defined over seasons, decades and generations? To what extent has the West really reigned supreme over the East in recent years? We decided to look at a few historical measurements to try to find some answers. The chart above tracks the All-NBA First Team selections since 1982, sorted by conference. Overall, the West has a commanding lead, with 123 honorees to 77 from the East. That gap is primarily due to a dominance in the 21st century, with 70% of the players selected being from the West, including two clean sweeps in 2000 and 2007, the only of their kind since 1982. The West’s superiority has been even more pronounced recently. Only once since 2013 has there been more than one Eastern Conference player selected to the All-NBA First Team. From an individual performance perspective, the cream of the crop has primarily come from the Western Conference.

However, things could look very different in 2022. If the season ended today, there’s a very strong chance that DeMar DeRozan, Giannis Antetokounmpo and Joel Embiid would all represent the East on the All-NBA First Team. Embiid has the toughest path of the three, as he’ll either have to beat out Nikola Jokic for the center spot or make the team as a forward thanks to some manipulation of the positions. It would mark Embiid and DeRozan’s first First-Team honor, and the first time in over a decade that three players are chosen from the Eastern Conference, signaling that the tide has turned Eastward, at least in 2021-22.

Conference Depth: How Good Was the 8 Seed? Another way to evaluate conference strength is to look at the depth of quality teams. For years making the playoffs in the East has been viewed as a less impressive feat than making it in the West because the 7 or 8 seed in the East has typically had a worse record than their counterparts in the West. The table above shows that since 2004, 13 teams that finished under .500 have made the playoffs in the East, compared to just 1 in the West (2019-20 Trail Blazers, who squeezed into the playoffs in the bubble). Conversely, 16 teams in the West have finished with a .500 or better record and missed the playoffs, compared to just 4 in the East. The Rockets and Suns have been particularly victimized by the strength of the West, each having three such seasons since 2004 in which they won more games than they lost but still didn’t earn a playoff berth.

This measurement gets a little muddled by the introduction of the play-in tournament, but just looking at the top 8 seeds, it seems unlikely that there will be a team under .500 to finish in that group in the East. The Nets, who currently hold the 8th seed, are just now getting healthy and project to improve on their 32-31 record during the final stretch of the season. The 7th-seeded Raptors are playing their best basketball of the season over the last few months and would need a considerable collapse to see their 34-27 record finish below .500. In the West, a recent 4 game win streak has lifted the 8th-seeded Clippers above .500 for the first time since January 1st. They have a challenging road ahead, however, with games against the Suns, Warriors, Jazz (2x), Bulls, Sixers and Bucks remaining, and with stars Kawhi Leonard and Paul George still sidelined.

Which Conference is Stronger at the Top? To determine which conference has been more top heavy at the team level, we sorted every team since 2005-06 that finished the regular season with a net efficiency of +5 points per 100 possessions or better. There have been 40 such teams in the West, a sizable advantage over the East’s 28. Like the All-NBA First Team measurement, this discrepancy has been especially pronounced in recent years. Since 2012-13, there have been 25 of these teams in the West, compared to just 12 in the East.

So far in 2021-22, there are four teams that fall into this category: the Suns, Warriors, Jazz and Celtics. The Celtics have leapt into this elite tier thanks to an outstanding run in the calendar year of 2022 in which they have posted an incredible net efficiency of +12 points per 100 possessions. Still, with 3 out of the 4 teams, the West might not be ready to relinquish their crown as the conference of elite units.

An interesting note on the above table: 11 out of the 16 champions from 2006 to 2021 fall into the category of having a +5 net efficiency or better. The missing teams are the 2021 Bucks, the 2020 Lakers, the 2016 Cavaliers, the 2010 Lakers and the 2006 Heat. Time will tell whether the Suns, Warriors, Jazz or Celtics can make it 12 of 17, whether another team will creep into this tier and win it all, or whether 2022 will be the third straight year that the champion is not among the top few most efficient teams in the regular season.