We used Synergy’s new Shot Quality metric to find out which NBA players make their teammates’ shots easier and which make their opponents’ shots more difficult.

Take Luka Doncic, for example. Luka makes his teammates’ lives easy. He sets them up with wide-open threes. He zips them passes right next to the hoop. He puts stress on opposing defenses in all kinds of ways that free up his teammates to relax and just score. Playing with Luka looks like fun.

I’m going to attempt to attach a number to all those good times by quantifying how Doncic impacts the difficulty of his teammate’s field goal attempts using our new metric, Synergy Shot Quality (SSQ).

Dwight Powell has been Luka’s top beneficiary this season. Doncic has assisted 135 of Powell’s baskets and half of those assists came in pick-and-roll actions as Powell rolled to the hoop. The clip below shows an example from Game 2 where Doncic freezes Suns center Deandre Ayton long enough for Powell to sneak behind him for an alley-oop slam. You’re not going to find a higher quality shot than that!

Not surprisingly, Powell tends to get better looks when he is sharing the court with Doncic. This season, his SSQ was 1.40 expected points per shot with Luka and 1.33 without him, that’s an improvement of 6.4 expected points added for every 100 Powell shots.

Luka has assisted Dwight Powell as the roll man in PNR 72 times this season. pic.twitter.com/brO78hy1q8

Doncic makes everything run in Dallas. He’s created a bigger fraction of his team’s points using pick-and-roll, isolation, and post-up actions (via his own scoring or by passing) than any other player in the league this season. Even when a team succeeds in shutting down the Mavericks first two PNR options – blocking off the ball handler and the roll man – Doncic tends to suck help defenders into the lane freeing up shooters, like Reggie Bullock. Bullock’s shot quality improved by 1.8 expected points per 100 shots with Doncic on the court this season.

Luka has kicked the ball out of PNR actions to Reggie Bullock for a spot-up score 23 times this season. pic.twitter.com/D3E7dYbG45

Doncic is also a dangerous post-up threat, especially when he finds himself bumping up against undersized defenders like Suns guard, Cam Payne. If opponents send a double team to neutralize Luka in the post, he can kick the ball back out to the perimeter for an easy shot. Sometimes an open shooter is one pass away. Other plays require a swing pass or two. Doncic won’t get credit for the assist on plays like these, but he is the one responsible for creating the high-quality shot. Maxi Kleber’s shot quality improved by 4.9 expected points per 100 shots with Doncic on the court this season.

When Luka draws a double team in the post, it usually opens up shots for his teammates. pic.twitter.com/XQe41vqRhm

Doncic makes all his teammates’ lives a little better. When Luka is running the show, Jalen Brunson is free to operate away from the ball more often. That means fewer occasions when he has to create his own shot and fewer high-difficulty finishes like the one below from Game 2 which he attempted over the outstretched arms of Suns defender, Jae Crowder. When Doncic heads to the bench, Brunson’s SSQ drops from 0.98 expected points per shot down to 0.93 (in other words, Luka’s presence adds 4.3 expected points per 100 Brunson shots).

When Luka is on the bench, his teammates are forced to create more of their own shots. pic.twitter.com/Ib45kEdic7

Are you noticing the trend? Plus 6.4. Plus 1.8. Plus 4.9 Plus 4.3. If we look at the difference in shot quality for every Dallas Maverick player when Doncic is on the court versus when Doncic is off the court, we find that he improved his average teammate’s SSQ by 5.1 expected points per 100 shots over the last two regular seasons.

To find out which players have the biggest impact on other people’s shot quality, we can apply a regularized adjusted plus-minus modeling approach to SSQ and expand the scope of our analysis to include every NBA player over the last seven years, on both sides of the ball.

But what the heck is a regularized adjusted plus-minus modeling approach!?

Have you ever heard a basketball announcer say something like, “It won’t show up in the box score tomorrow morning… but that was a game-changing play!” The jarring screen that frees up a shooter, the perfectly-weighted pass that leads a rolling teammate into a 4-on-3 situation, the well-timed cut that opens up space for a teammate’s drive… None of these little victories will be tallied up in the count of points, rebounds, and assists but they are winning plays, nonetheless.

The all-encompassing stat, plus-minus (and its less capricious cousin, regularized-adjusted-plus-minus), was created to fill in the gaps left between the columns of the box score. Any player with a positive plus-minus tally is one whose team beat its opponent during the minutes when he was on the floor in a particular game. Regularized adjusted plus-minus is a supped-up version of this simple stat that estimates the plus-minus impact of a player over the course of a full season (or multiple seasons) while accounting for everybody else who was on the court alongside him during every play (teammates and opponents).

In this analysis, we are applying a similar modeling approach to quantify a player’s shot quality impact. Our model accounted for the identity of the shooter and his four teammates, their five opponents and the teams everyone was playing for as well as the season. This setup allows us to estimate – with all other things being equal (ie. same shooter, same teammates, same opponents) – how much better of a look we tend to get with, say, Luka Doncic on the court than we do with him on the bench. 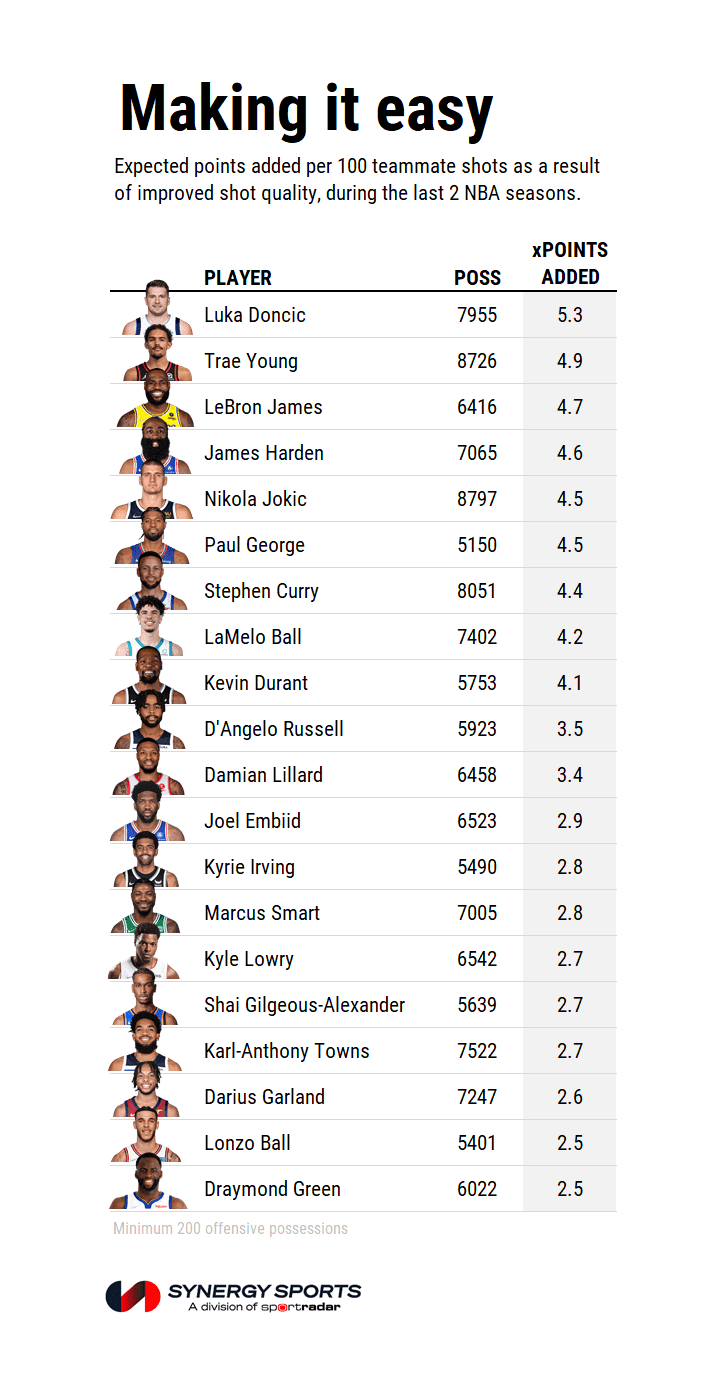 The list of players who demonstrated the biggest bumps in teammate SSQ was dominated by point guards (Trae Young, Steph Curry, LaMelo Ball, Damian Lillard) and other primary creators of various shapes and sizes (LeBron James, James Harden, Kevin Durant, Paul George) as well as some bigs (Nikola Jokic, Joel Embiid, Karl-Anthony Towns, Draymond Green) and, of course, Doncic at the top of the heap. The list is impressively starry. Almost suspiciously so!

The regularization part of the model helps keep the focus on the stars. It asks the model to emphasize players with larger possession counts and disregard the noisy low-minute ones. I’m also using two seasons of data, here, to smooth things out a bit. But RAPM aficionados would perhaps expect to see more odd-ball names sprinkled into the top of this list. The exclusivity of the Top 20 seems to be a perk of using a process-based outcome (ie. we are looking at SSQ rather than points); we should, in theory, arrive at a list of helpful offensive players faster (with less data) this way. A kick-out to a wide-open teammate who happens to miss the subsequent shot would still get credit in a model quantifying SSQ impacts, not so for a conventional RAPM.

Looking back through the last seven years of teammate shot quality impacts, we see that the top of the list has remained remarkably consistent. Only 15 players cracked the Top 7 spots over this time span and there were 9 repeat names among them. Harden, James, Curry, Young, and Doncic were each in the Top 7 for every two-season period (6 times each for the older guys, 4 times each for Trae and Luka). We included defensive players in the model, too. This gives us a more complete accounting of an offensive player’s impact on his teammates’ shot quality, but it also gives us a chance to quantity reductions in shot quality caused by individual defenders.

Here’s the list of players who were on the court for the 20 biggest drop-offs in SSQ over the past two seasons. The list of high-impact defenders is perhaps less obviously “correct” than the offensive list. But some of the best defensive big men in the league are there (Rudy Gobert, Draymond Green, Bam Adebayo, Giannis Antetokounmpo, Myles Turner, Al Horford) as well as some wings (Jayson Tatum, Deni Avdija, Kenrich Williams) and guards (Alex Caruso, Gary Payton II, Derrick White) who are highly rated defenders according to the plus-minus stats. Notice that the range of impact is smaller on defense than it was on offense.

Looking back through previous seasons, Green (6x), Tatum (5x), Gobert (3x), White (2x), and Antetokounmpo (2x) are all on multiple lists. Some other notable defenders who were absent in the most recent iteration (Joel Embiid, Anthony Davis, Patrick Beverley) were included in multiple Top 20 lists from the past. Draymond Green was the only player to be in the Top 20 lists for both offensive and defensive SSQ impacts but you can see some other great two-way players in his vicinity on the chart – including Tatum, Antetokounmpo, and Chris Paul, all of whom are still in the playoffs.

We think this kind of modeling approach could be very useful for player evaluation and we’re excited to try out similar models for other stats like foul rates, rebounds, and play type usage.