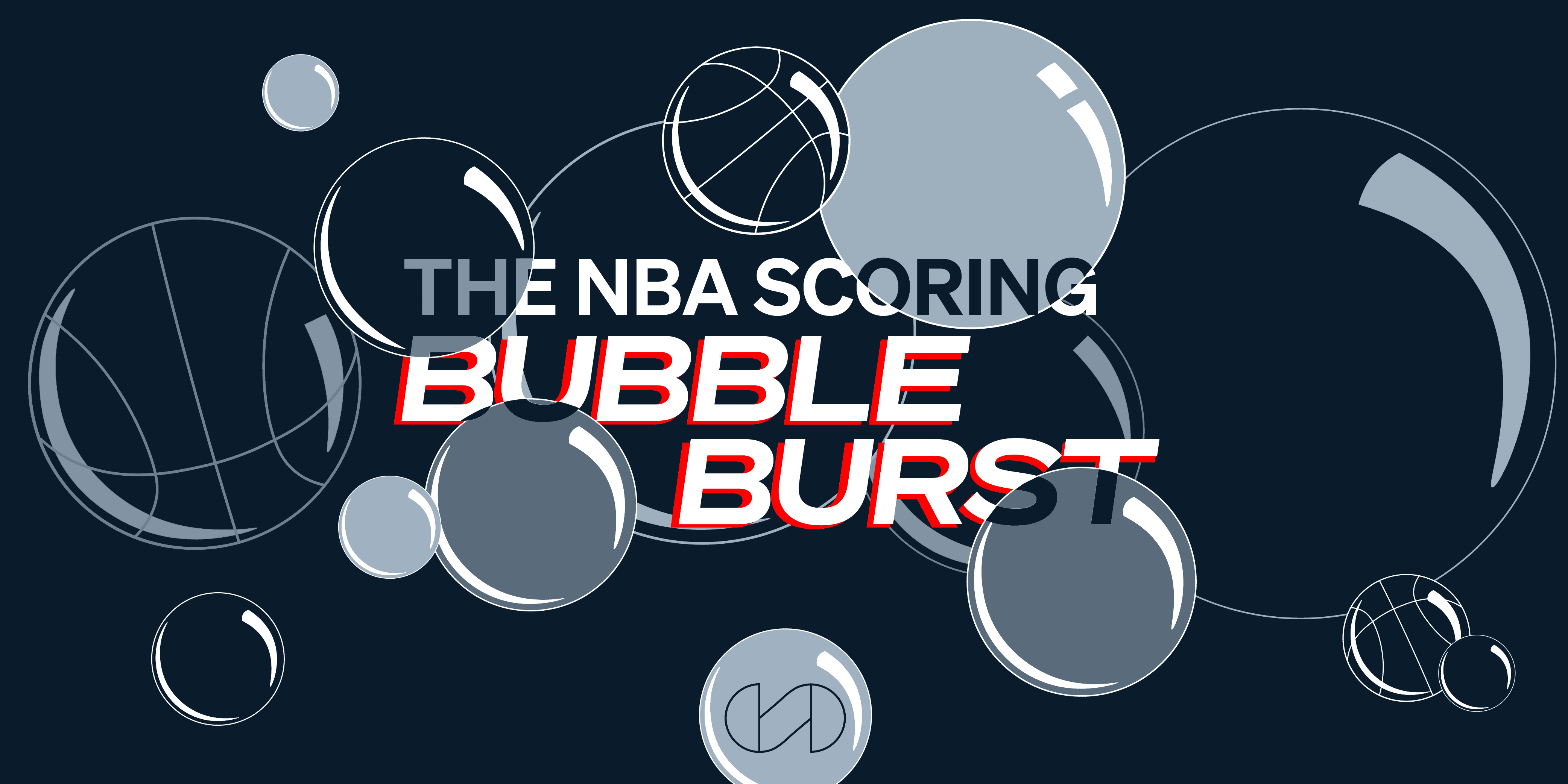 Breaking down league trends in scoring by play type and shot type.

The 2020-21 NBA season was an over-the-top offensive fireworks display. We were treated to electric flashes of screaming spiders, graceful arcs of dazzling horsetail shells, and the memorable boom and sizzle of the Nishiki Kamuro. But suddenly it feels like the Sousa music has stopped and the grand finale is over. The scoring bubble has burst. Last year, 19 of the 30 teams in the League scored more than 1 point per possession. Seven(!) different teams – the Nets, Blazers, Clippers, Jazz, Bucks, Suns, and Nuggets – all beat the previous record for most efficient offense in NBA history. This season, only three teams are scoring above 1 point per possession, and nine teams are below last year’s league-wide low-water mark for offensive efficiency of 0.928 PPP.

So, what happened? Where has all that scoring gone?

Players are pointing to the revised officiating guidelines, the new basketball, and the irregular offseason schedule as potential causes of the league-wide cool off. I dug into Synergy’s data to find out how scoring has changed across specific types of plays and shots to help figure out which of these explanations might make the most sense.

For every game, Synergy catalogs each scoring chance as one of 11 types of plays: scoring as the pick-and-roll ball handler or roll man, in isolation or transition, working around handoffs or off-ball screens, from spot-ups or post-ups, on cuts or putbacks, and anything in between (lumped into the catch-all “miscellaneous” category). Scoring rates differ between play types, as shots coming from cuts, rolls, and transition chances tend to produce more points per possession and shots coming from isolations and post-ups typically yield less. However, the scoring rate for each individual type of play tends to be consistent from year to year. This has not been the case this season.

Here is a look at how league-wide scoring rates have shifted for each type of play over the past few years (using the 2018-19 season as our pre-bubble point of comparison). After the first few weeks of the season, league-wide scoring rates are down across 8 of the 9 play types. The declines span ball handler activities (in PNR and transition), wing duties (spot-ups, screens, and handoffs), and big guy stuff (cuts, rolls, and posts) and there have been drops in efficiency for both self-created scoring chances and chances created by others. The only play type that has resisted the scoring slump is isolation offense which has seen an increase in league-wide efficiency from 0.91 to 0.93 PPP this season (after 900+ iso possessions).

Last week, we talked about some players who are frequently fouled on jump shots and tried to anticipate which shooters would be most impacted by the new officiating guidelines designed to curb abrupt, overt, and abnormal attempts to draw fouls. Trae Young was an obvious target for these new, no-nonsense ref policies, and he has acknowledged that he is seeing more contact go un-whistled this year. Likewise, James Harden began the season with his most meager free throw totals since his Oklahoma City Thunder days – attempting just 15 in his first 5 games. In general, free throw trips have dried up all around the league, with the average team attempting just 19.9 per game, down from 21.8 last season.

If we plot the trends in shooting foul rates over the last four seasons for each play type, we can check to see if the scoring declines appear to be the result of this year’s more defense-friendly officiating. Look at those big drop-offs in shooting foul frequencies! It sure seems like less frequent foul shooting could be leading to less efficient offense, right? The problem is that if we compare the trends in foul frequency with the trends in overall offensive efficiency – panel by panel, play type by play type – we find that the suspected cause does not always match the effect.

Unlike the PPP declines – which we saw (nearly) uniformly across the board – the shooting foul declines have been concentrated among five specific types of plays: PNR – ball handling, isolation, transition, handoffs, and off-ball screens. In contrast, there were only modest decreases in the percentage of shots that drew a foul in spot-up scoring chances and chances for the PNR – roll man. Shooting fouls on cuts have been holding steady and post-up shooting fouls are on the rise.

Of course, it is possible that fouls could disappear from one play type and reappear as missed shots in a different play type. For example, imagine the 2020 vintage of a Trae Young – Clint Capela pick-and-roll play. Perhaps Young snakes around the screen into the lane and – feeling his defender trailing after him – stops abruptly and leans backwards into contact, drawing a shooting foul. This season, because of the new officiating guidelines prohibiting abrupt and abnormal foul hunting, that play may unfold entirely differently. Maybe Young anticipates that he will not be able to earn free throws in that situation and he is forced to try something else, for example, to force a pass to a rolling Capela. If some of those plays that were becoming free throw trips last season are now turning into forced passes or lobs that are being bobbled in traffic we might end up observing lower scoring efficiency for PNR – ball handling as well as for PNR – roll man. Similarly, other non-fouls that evaporate early in a possession may have trickle down effects in the plays that develop later in the same possession, especially if defenses start to adopt to play more aggressively in response to the new officiating.

It may also be that there is more going on here than just the changes in officiating and decreases in foul rates. There is also a new basketball this season, and some players have complained about its harder feel. Is it possible the ball is causing an increase in turnovers and that these giveaways are behind the decreases in efficiency? Once again, parts of the story seem to fit together here. There have been higher turnover rates for PNR – ball handling, handoffs, and off-ball screens, with upticks of at least 1 percentage point for each. These are three of the types of plays for which we have seen decreases in shooting fouls drawn and decreases in scoring efficiency. Likewise, there have been modest increases in turnover rates for transition, spot-up, and cut plays. Interestingly, there was a slight downturn in turnover frequency on isolation possessions, which matches the increase in iso points per possession we saw earlier. There have also been fewer turnovers on scoring chances as the PNR – roll man and from post-ups, which means we are 0-for-2 in explaining the decreased scoring efficiency for those two types of plays.

To approach this question from a different direction, we can also examine how shooting percentages have changed for each type of shot from the beginning of this season. Once again, we see decreases in efficiency across a diverse group of categories, including several types of jumpers, runners, and layups (and hooks, although they make up only about 4% of all shots, league-wide). The shots closest to the rim – those dunks and tip shots that are least likely to be impacted by the officiating guidelines or the ball change – are the only types of shots that are holding strong at the same field goal percentage as last season (or higher). Once again, we are left with a dissatisfying mix of evidence to prove our case against the refs as the culprits for the reduction in scoring. Layups, hooks, and (especially) runners are yielding fewer shooting fouls this year and these shot types each had matching decreases in 2-point percentages. Likewise, tip shot foul rates stayed the same and tip shot conversion rates ticked up. So, at first glance, our “blame the refs” hypothesis is holding some water. But things come unglued a bit when we look closely at the three panels across the top, which display the league-wide trends for jump shots.

Aside from the refs and the ball, another significant difference between this season and the previous two is the presence of stadiums full of fans, something that was not a reality in the Orlando bubble two years ago nor for some games last year. Recent research suggests that fans can have very real impacts on athletic performance and what is being interpreted by some as a decrease in scoring from last season to this season could just as easily be characterized as a return to normalcy after a two-year stretch of outlier-level, asterisks-worthy offensive production. Indeed, the scoring slowdown is not just an NBA phenomenon. Several leagues around the world are experiencing decreases in offensive efficiency this season, suggesting that fan distractions may be the common driver behind worldwide offensive slumps this season.

So, is it the fans? The refs? The ball? The easiest answer might just be that it is too early to know. We have only seen two weeks of the NBA season; shooting and scoring will surely continue to fluctuate all around the league from here on out. In fact, scoring rates tend to ramp up over the course of the season (even if there is some evidence that these initial declines will outstrip the anticipated increases in scoring that will come later) as shooters get into their grooves, offenses start to click, and buckets start to fall.

We will continue to track rates of scoring, fouls, and turnovers at Synergy and keep you posted as things evolve over time.