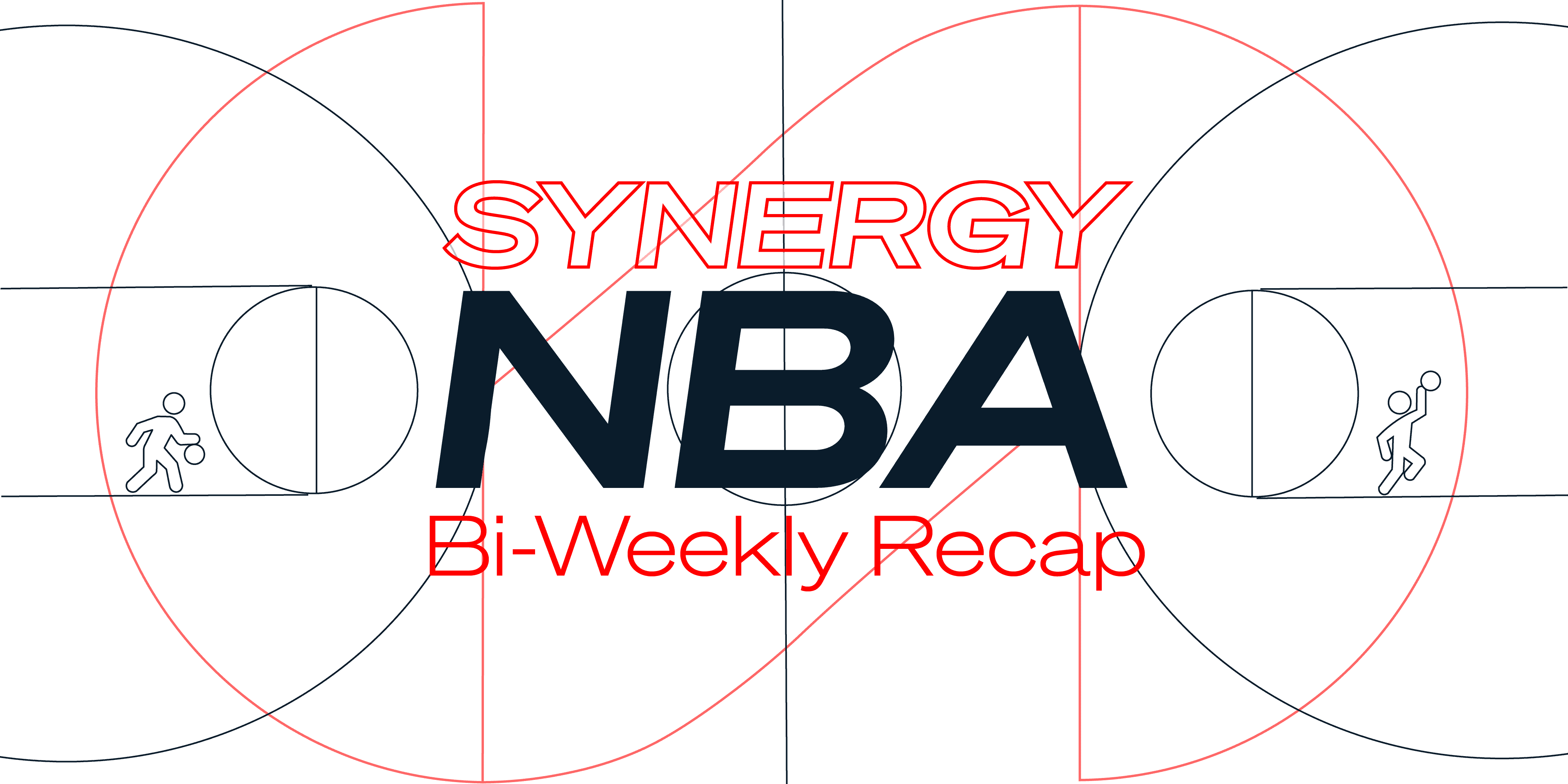 The first month of the 2021-22 NBA regular season ended with a potential Finals preview between the Warriors and Nets but was defined by just how many compelling narratives gained momentum in the early going. There has been no shortage of storylines to track since the season tipped off with the number of teams playing at a high level on both ends, the impact of the rookie class, the rise of teams like the Bulls and Wizards, the impact of the new ball and officiating standards, and the huge strides being made by several young stars all keeping things interesting. While the Clippers, Nuggets, and Cavaliers were the biggest movers over the last two weeks, they are all chasing the Warriors who surged ahead of the field to stake an early claim as the team to beat.

The Return of the Warriors

It would have sounded cliche just a few years ago, but the Golden State Warriors have been the best team in basketball so far this season. They boast the league’s top ranked defense, allowing just .90 points-per-possession and holding opponents to just 42.3% from the field. They also lead the league scoring 115.2 points per game and are second in offensive efficiency averaging 1.01 points-per-possession.

Throughout Steve Kerr’s tenure, Golden State has employed a unique offensive style, and their hot start this season looks no different. What makes the Warriors attack so distinct is their constant, often unpredictable movement and use of off-ball screens to free up shooters. Since the 2014-15 season, the Warriors have led the league in scoring opportunities created by off-ball screens every single year, often by a drastic margin. A substantial portion of their offense has been predicated on the elite backcourt of Steph Curry and Klay Thompson running wild around screens until they find the little bit of space they need to elevate and drain a jump shot. The story has been the same this season, with one notable exception. The Warriors still lead the league in possessions (10.1) and points (11.3) per game created by off-ball screens, with the second-place team in either category being nowhere close. However, with Klay Thompson still sidelined, they have been reliant on the emergence of another sharpshooter to fill his role: third-year guard Jordan Poole. Poole is averaging 19.5 points per game and 1.03 points-per-possession over the Warriors last 8 games while ranking 5th in the league in total points coming off screens, trailing only Steph Curry, Buddy Hield, Jayson Tatum and Devin Booker.

While Steph is putting together another MVP campaign, younger brother Seth is off to an impressively hot start of his own. The Philadelphia 76ers currently have the most efficient offense in the league, thanks in large part to the development and production of the seventh year guard out of Duke. In an expanded role, Curry is averaging 15.4 points per game and shooting a scorching 52% from the field and 46.5% from deep. His 1.16 points-per-possession ranks 5th out of the 83 players who have used at least 185 possessions so far this season.

Curry is proving that he can be an efficient scorer in a number of areas beyond spot up shooting. Curry’s clever navigation, the soft touch on his floater, and his nearly automatic pull-up jumper have made him a highly effective pick and roll ball handler, where he ranks 10th in the NBA averaging 1.04 points-per-possession. Curry is shooting 47% on all jump shots off the dribble and a blistering 57% on such shots in the midrange. See Curry’s shot chart below, which features a lot of red in the pull-up two and floater areas. Curry’s performance in transition has been perhaps even more impressive as his efficiency is truly off the charts. He’s showcased a knack for finding the open space along the three-point line while running the floor or trailing the transition opportunity. The result is a staggering 1.6 points-per-possession and an improbable 88% effective field goal percentage, both of which are first in the league (min. 30 possessions). For context, that effective field goal percentage in transition would be the highest ever recorded for a season since Synergy began logging games in 2004.

Despite it being his seventh year in the league, this season marks just the first time Curry has ever suited up for the same club in back-to-back seasons. In his second year in Philly, he’s become an indispensable piece for a Sixers team that once again has championship aspirations.

One of the early season surprises has been the Cleveland Cavaliers, who sit at 5th in the Eastern Conference standings with a 9-6 record. Rookie forward Evan Mobley has been a key part of that success. The 3rd overall pick out of USC is averaging 14.6 points and 8 rebounds per game while shooting 49.4% from the field and has been a game changer on both ends. Among all rookies, Mobley ranks in the top five in every box score statistical category.

🔥 @evanmobley comes up big in the @cavs 19-point comeback win.

Mobley’s length and activity make him a versatile defender who appears to be everywhere at once on that end of the court, but his contributions on offense have been perhaps even more impressive thus far. Mobley has been very effective as a rim runner for a Cavs team that moves the ball exceptionally well. His 62 total points from cuts to the basket is third in the NBA, trailing only Jazz Center Rudy Gobert and teammate Jarrett Allen.

Mobley’s mobility for his size was one reason he was such an enticing prospect, and it’s been on full display to begin his career. His 1.22 points-per-possession while running the floor in transition ranks in the top-30 in the league and is first among rookies. Mobley has also shown flashes as a post-up scorer, where his 1.10 points per-possession is good for 10th in the NBA. Beginning to find his spots at the professional level, he is already making noticeable strides as a scorer and facilitator just a few weeks into his rookie campaign.

Unfortunately, news broke Tuesday that Mobley will miss 2-4 weeks with a right elbow sprain. But expect this standout, two-way rookie to pick up right he left off when he returns. Last season’s Rookie of the Year has elevated his game to another level in 2021-22. Over the last seven games, Ball is stuffing the stat sheet with 18.4 points, 8.1 assists, 9.1 rebounds, and 2.6 steals per contest. The Hornets have been up and down through the first month of the season, but one thing’s for sure: Ball continues to be must-see TV.

The Bulls have been one of the best storylines of the first month, and the duo of LaVine and DeRozan is turning into one of the most lethal combinations in the league. Over the last two weeks, DeRozan and LaVine are both averaging over 26 points per game and on the season, they rank 4th and 5th respectively in efficiency for volume scorers. They both operate primarily as the ball handlers in the pick and roll, where they combine to score 16.2 points over 17.3 possessions per game—by far the most of any duo in the league.

LaVine and DeRozan complement each other because they can put pressure on the defense at all three levels. While LaVine has been excellent from the perimeter, scoring 1.12 points-per-possession from downtown and 1 in the midrange, DeRozan has been elite inside, scoring 1.27 points-per-possession on short range jump shots and 1.42 at the rim. The duo capped off their impressive first month with 129 combined points in back-to-back wins in Los Angeles.

The Clippers have been on a tear recently, winning 7 of their last 8, and a familiar face has been leading the charge. George has been playing at an MVP level for the Kawhi Leonard-less Clips, averaging 27 points, 8.2 rebounds and 5.1 assists per game. He’s been particularly effective scoring out of spot up situations (1.39 points-per-possession) and coming off screens (1.22).

During the Cavaliers hot stretch, Allen has been dominant in the paint. Over the past two weeks, the Texas product is averaging 15.5 points and 12.3 rebounds per game while shooting 65.5% from the field. His 127 points finishing around the rim in the half court this season is good for second in the entire league.

Jarrett Allen with the HAMMER 😳 pic.twitter.com/J0Gh7brv1W