The Art of the Comeback

This week at Synergy Sports we are excited to be launching a revamped team site that will better help coaches and scouts find winning team strategies. The new site has all the same features you’re familiar with from the old site – plus some fun new ones! Let’s examine what you can do with one of my favorite new tools, the game flow chart.

A few minutes into the second half of their January 29th game against Oklahoma State, the Florida Gators found themselves trailing 51-38. And then, suddenly, the tide turned. A made free throw gave the Gators a chance to set up their full-court pressure, leading to some uncertain passes in the Cowboy backcourt that resulted in back-to-back turnovers. On the next three trips, Florida’s scrambling defense led to a held ball, a charge, and a 5-second violation, one after the other. It was a quintessential college basketball comeback!

Florida trailed Oklahoma State by 16 in the first half of a game in January but came back to win 81-72. pic.twitter.com/fAHEUBydS3

Now, let’s put ourselves in the shoes of OK State coach, Mike Boynton, the man on the losing side of this thrilling come-from-behind victory. If it were me, after the game I would need to watch those 89 seconds again. I’d want to know what went wrong and to talk to the team about what we could do better next time. And with the new game flow feature on Synergy’s team site, a coach can do exactly that! Find the moment where the lead slipped away, click on the tipping point in the game flow, and go straight to the video editor to rewatch the critical game action. I used the game-flow feature to dig through 100 of the biggest comebacks from the 2021-22 Division 1 Men’s Basketball season. In each instance, the winning team trailed by at least 15 points before turning things around. I wanted to see if there was a common thread running between all these resilient performances. Is it possible to learn the art of the comeback?

To find out, for each game, I picked out the moment when the ascendent team started their run on the game-flow chart and clicked-in to watch the 10 plays that followed. I tallied up the hustle plays I saw on the tape – all the deflections, box outs, and dives onto the floor, among other things. My hunch was that most big comebacks are fueled by these little hustle plays.

Take this clip, for example.

Indiana trailed Michigan by 17 in the second half of a game in March but came back to win 74-69. Trey Galloway got the back tip on this hustle play. pic.twitter.com/62K6VSNgy3

Indiana had entered the Big Ten tournament as a bubble team with a chance of sneaking into the NCAA Tournament, but they were down big in the second half against Michigan. When Trayce Jackson-Davis sent his dunk attempt ricocheting off the back of the rim and Michigan’s Eli Brooks zoomed down the court in transition with the ball and a 12-point lead in hand it would have been easy for Trey Galloway to hang his head and half-step his way back on defense. Instead, he busted his butt down the court and back-tipped the ball away from Brooks, giving Davis another shot at slamming the ball home and continuing Indiana’s comeback. In the end, the Hoosiers won that game 74-69 and then another one (over Illinois in the Big Ten quarterfinals to secure an NCAA Tournament bid) and then *another* one (over Wyoming in the First Four).

In that example, Galloway’s hustle was recorded as a steal and a turnover, but many of the little efforts that are required to erase a 15-point lead never find their way into the box score. Sometimes a deflection like Galloway’s doesn’t lead directly to a dunk (or to any points at all!), but it can be a winning play nonetheless.

Xavier trailed Creighton by 17 at halftime of a game in January but came back to win 74-64. Coach Travis Steele was fired up after Paul Scruggs knocked the ball away from Ryan Nembhard and out of bounds. pic.twitter.com/oP61tAvLuM

In this Big East conference game on January 29th, Xavier trailed Creighton by 17 points at halftime. But when Paul Scruggs and the rest of the Musketeers came out of the locker room to start the second, they brought a different energy, ratcheting up the on-ball defensive intensity. The deflection in the clip above wouldn’t be marked as a steal but it is evidence of Xavier’s sense of urgency and a symptom of the effort required to turn the game around. They ended up winning by ten, 74-64. 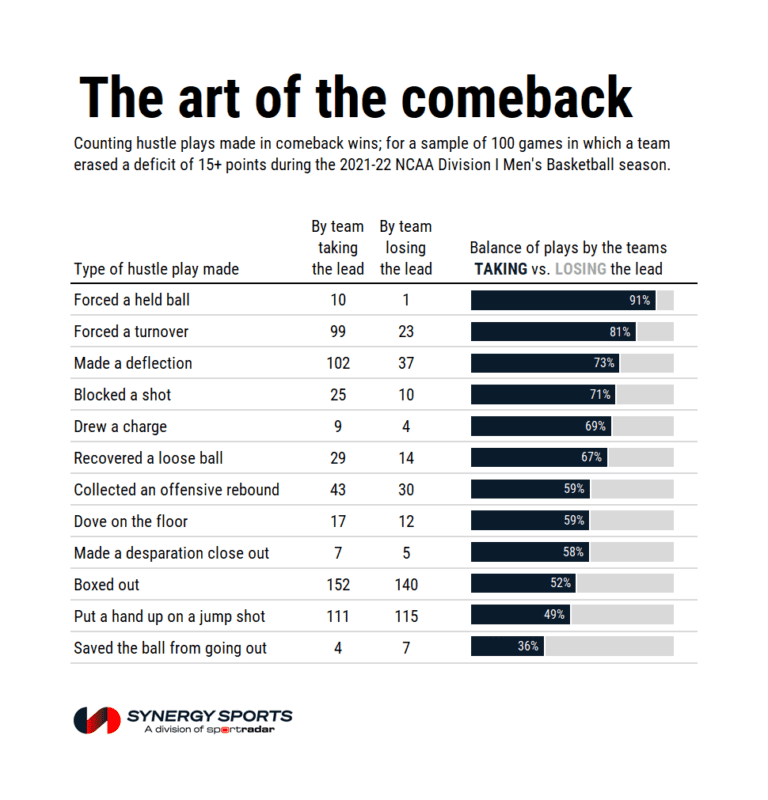 For example, most of the forced turnovers (81%), deflections (73%), and blocked shots (71%) were racked up by the teams who were in the middle of a comeback. These teams also took slightly more charges (69%), recovered slightly more loose balls (67%), and dove on the floor a bit more often (59%) than their opponents.

Interestingly, two of the more common hustle plays – box outs and jump-shot contests – were split more evenly between the winners and the losers. I’m confident that a coach (who has expert knowledge of the defensive schemes and responsibilities of each defender on the court) would do a better job than I did in assessing the correctness of a player’s rebounding or close-out positioning, which might reveal a signal hiding in the noise of my play-tagging data. Still, it’s also fair to say that the teams who were blowing big leads were often trying hard, too.

In some cases, a desperate hustle play – like an attempt to save a ball from going out of bounds or a really long close out to an open shooter – was actually an indication that a player was (at least initially) out of position.

Columbia trailed Binghamton by 16 in the second half but came back to win 85-77. Luke Bolster made a 53-foot close out on this Tyler Bertram 3-pointer during their comeback. pic.twitter.com/PNcnh7sMFH

I admired this epic running shot contest from Columbia’s Luke Bolster. After realizing that his trap had left Binghamton’s Tyler Bertram (a 44% shooter on unguarded catch-and-shoot threes last year) wide open on the opposite wing, nobody would have blamed the 6-foot grad student for giving up on the play. But Bolster opted to sprint across the court and launch himself into the shooter’s line of sight before doubling back into the fray to attempt to collect the resulting long rebound at which point he got bonked on the head and knocked down to the floor. His effort was rewarded as Columbia drilled a game-tying three on the ensuing play and went on to win the game 85-77.

Now, the art of the comeback isn’t *all* about hustle. I saw plenty of turnarounds that were sparked by nothing more than dumb luck. A losing team trading a few made contested threes at one end for a few *missed* threes at the other. A good whistle that earned a charitable 3-point play. An unforced error by the team in the lead. And suddenly a 15-point edge is down to single digits.

Still, it was neat to see some teams like Florida, Indiana, and Columbia making their own luck through hustle and effort. It was a lot of fun to watch and inspiring, too! Just what I wanted to see.

We hope coaches will use the game flow charts to watch the clips that they want to see, too. And in doing so, maybe they can uncover their own art of the comeback.

To read about all the changes coming with the new team site, read our guide here.