The Gift of Basketball 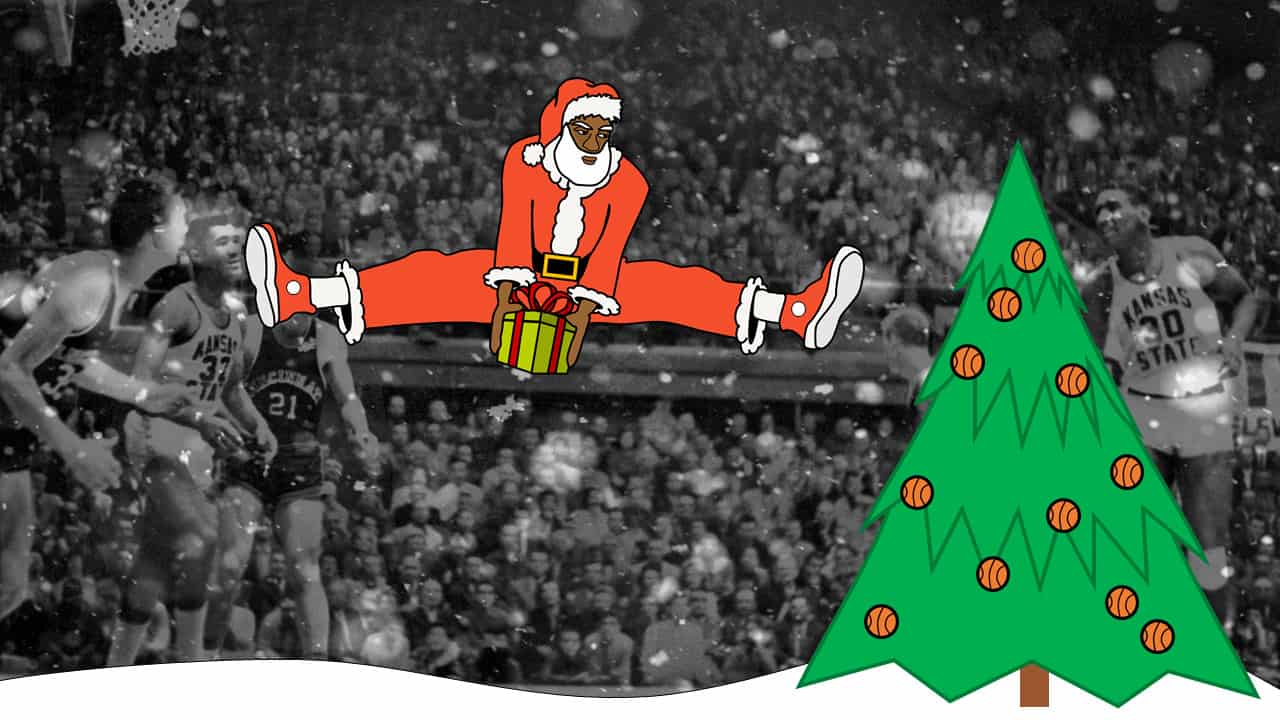 The gift of basketball

Sifting through stats from NBA games of Christmases past

The turkey was cold and the conversation stilted so – when my toddler threw a tantrum and ran crying from the Christmas dinner table – I wasn’t really that disappointed. He was headed for his grandparents’ guest bedroom, that bastion of holiday sanity, where the 13-inch black-and-white television resides. The Cavs were playing the Warriors in an NBA Finals rematch that night, so I followed to “console” 😉  him and the subsequent 15 minutes of surreptitious NBA viewing was the best gift I got all day!

Over the last 74 years, the NBA has served up a total of 255 Christmas day games (not all on broadcast TV, of course). That’s at least one game each year, every year, except for the one lockout-impacted season of 1998-99 (Christmas was cancelled that year). For each of the last 13 seasons, December 25th has featured five NBA games and that tradition will continue this year. Nearly 2,000 different NBA players have played on Christmas day over the years; so, let’s take a minute to hand out some Christmas day superlatives – for starters, who has passed out the most yuletide assists in NBA history? NBA legend, Oscar Robertson played 12 Christmas games – 10 straight from 1960 to 1969 with the Cincinnati Royals and then 2 more in 1971 and 1972 with the Milwaukee Bucks. Over the years, Robertson gift-wrapped buckets for a slew of Hall-of-Fame teammates including Wayne Embry, Jack Twyman, Jerry Lucas, Bob Dandridge, and Kareem Abdul-Jabbar. In those 12 games, Robertson handed out a total of 144 assists, a dozen a game. In a 141-127 loss to the Lakers in 1961, Robertson distributed a high of 17 assists – that was very generous!

You might say Robertson is the Santa Claus of NBA Christmas basketball.

If assists are basketball’s Christmas presents, then what are steals and blocks? Scottie Pippen played 7 Christmas games – six of them amidst the Chicago Bulls championship run, from 1990 to 1996, and one more with the Portland Trail Blazers in 2000. Pippen took the fun out of 35 of his opponents’ possessions during those 7 games, by stealing the ball 24 times and blocking it 11 more. That’s an average of 5 stocks per game and many, many Christmases ruined. The holiday highlight for Pippen was a 36-point, 16-rebound game against the Knicks in 1994 when he nabbed 5 steals and had a pair of blocks including one on Hubert Davis to seal the game in the closing seconds.

“Scottie hated offense.
It could be his head wasn’t feeling alright.
It could be, perhaps, that his shoes were too tight.
But I think that the most likely reason of all
May have been that his wingspan was two sizes too tall.” Scottie Pippen was the grinch of Christmas day basketball. Hubert Davis, the Knicks, and all of his other opponents were the Whos and he was taking all of their presents. James has taken on waves and waves of opponents over the years even though sometimes it has felt like he was fighting all alone. He has defeated foes with brawn and brain, in turn. He has even climbed through the air vents of Nakatomi tower to free a whole office-party’s worth of hostages won several basketball games.

Need a bucket? A board? An assist? LeBron’s got you. Heck, you need him to strap a fire hose around his waist, jump off the roof of a 35-story building, and crash through a plate glass window?

Yes, Die Hard is a Christmas movie and LeBron is John McClane. He’ll be back at it again this Christmas as the Lakers are taking on the Nets in what will be James’ record-tying 16th career Christmas-day showdown.

Maybe you’ll check it out. I can hear him calling to you now: “Welcome to the party, pal!”